Whether you’ve considered this or not, effective listening is a skill, and an extremely important one at that.

Did you know that…

When it comes to managing projects, poor communications can result in increased project scope, the loss of multimillion dollar sales, and costly lawsuits. Since effective communication is grounded in the ability to listen effectively, perfecting this skill is well worth the effort.

When people interact in business and in their personal life, they interpret and infer meaning from a combination of verbal and non-verbal cues, as well as life experiences. Often the objective in communications is to enlarge the listener’s knowledge, perspective, and sensitivity that impact their beliefs. The listening skills of both parties are critical for this to be successful.

Those who rely mostly on transmission-centered communications, send a message to receivers without assuring that the meaning is understood. Whereas those who are typically meaning-centered communicators spend the extra time and take the extra effort to determine the receiver’s level of understanding of the intended message.

A meaning-centered view acknowledges that both parties during an interaction are simultaneously senders and receivers of the messages. They likely use multiple channels including nonverbal, paralinguistic (i.e., specific gestures, sounds, and intonations that occur alongside language), and contextual cues that contribute to the meaning associated with communication. Everything in a communication event is open to interpretation by those involved in the creation of meaning. 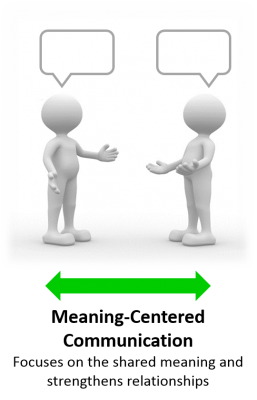 Transmission and meaning-centered communication are not opposing perspectives at the ends of a single continuum, but reflect different assumptions about the purpose and goals of communication. A transmission-orientation focuses on sending messages in order to influence a receiver; a meaning-centered orientation focuses on the shared meaning that paves the way for relationships.

A meaning-centered communication orientation describes an individual’s propensity to approach communication from the transactional, constructivist perspective — meaning is created during the exchange.

A transmission-centered communication orientation describes a person’s preference to approach communication from a more literal perspective focused on sending messages.

In particular, some people frequently communicate from a constructivist understanding, whereas other people more often communicate as if they can transmit knowledge to others. A meaning-centric communicator realizes that 100% understanding between people is improbable, and approaches each interaction accordingly. People engage in communication in a way that reflects their perspective on the communication process.

What is your communication orientation? To find out, take Merit Career Development's FREE Listening Skills Assessment. This assessment takes less than an hour. Upon completing, you will receive an explanatory report along with tips and techniques that you can use to become a more meaning-centered communicator. Greater success in the workplace awaits you.

PMPs: This assessment qualifies for one PDU and you will receive a certificate.