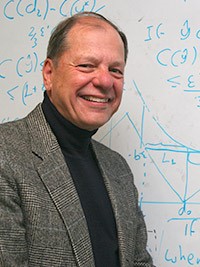 Professor John A. "Jack" Muckstadt, Acheson-Laibe Emeritus Professor of Business Management and Leadership Studies at Cornell University's School of Operations Research and Information Engineering, brings his wealth of knowledge and experience to Merit's Supply Chain Leadership curriculum. He is also the co-founder and Senior Partner at Cayuga Partners, the Co-Director, Institute for Disease and Disaster Preparedness, Weill Cornell Medical College; and a member of the Board of Scientific Counselors to CDC's Coordinating Office for Terrorism Preparedness and Emergency Response. Jack Muckstadt is one of the world's leading authorities in the field of Operations Research, noted for his particular expertise in one of its most challenging areas of study: large scale multi-echelon, multi-indenture service parts supply chains.Â  Most recently, his research interests have taken him in the direction of applying proven, innovative industrial supply chain management techniques to healthcare systems operations and logistics, with emphasis on disaster preparedness and response.
After receiving an M.A. in Mathematics and Ph.D. in Industrial Engineering from the University of Michigan, Jack taught at the US Air Force Institute of Technology and then was assigned to Headquarters, Air Force Logistics Command, where he laid the mathematical foundations for the logistics planning systems in use today within the Air Force Material Command. He was on active duty in the Air Force for 12 years and a member of the Air Force Reserves for an additional 9 years. Jack joined the faculty of Cornell in 1974 where he served as the school's Director for nine years, and established Cornell's innovative Manufacturing Engineering and Productivity Program.Â  With a unique gift and passion for teaching, Jack has garnered numerous educational awards from academic institutions and professional societies at all levels, and most importantly, from the many students he has taught, coached and inspired over the years.Â  In 2010, Jack was honored to be named a Stephen H. Weiss Presidential Fellow by Cornell's Board of Trustees.
An INFORMS Fellow and prolific researcher and writer, Jack has authored, and co-authored, dozens of scientific papers which have significantly contributed to Operations Research.Â  His books, Analysis and Algorithms for Service Parts Supply Chains, and Principles of Inventory Management, have become the standards for students in the field.
Jack's academic credentials have been augmented and honed over the years by real-world experience, as he has consulted with, and received research grants from, some of the world's leading commercial and public sector enterprises including Amazon.com, AGCO, AT&T, Avon, Eaton-Aeroquip, General Electric, General Foods, General Motors, IBM, Microsoft, NASA, Nissan, Philip Morris, SAS Air Lines, Sunoco Inc., Unilever, United Rentals, the US Air Force, the US Navy and Xerox.Â  As a consultant to the software and consulting industries, Jack has advised Accenture, Aspen Technology, BearingPoint, Servigistics, the Logistics Management Institute (LMI) and RAND Corp.

PDUs is a registered trademark of the Project Management Institute, Inc.